Mantibabs are a versatile and hardy species with a rich history that is kept alive by its society. They hold the very soul of crederia in their magic and are able to take hold of the energy that flows through the various planes. They were born with crederia and may be one of its oldest inhabitants. Through their prosperous time on this planet Crederia has flourished in both technology and capacity to hold new life. Babs are easily identified with their striped horns and colorful velvety patches that adorn their cheeks, elbows, and ankles. They find pride in their powerful horns and use their patches in greetings and affections.

Babs are capable of crafting the simplest shelters to intricate towns and cities. Kingdoms, caravans, underwater cities, desert jewels and the like can be found with babs in tow. They can lead simple lives as farmers, or they can choose to take up the title of Knight, Blacksmith, Alchemist, Scholar, and the like. They are deeply fantasy based so let out your creativity! What does your bab do? 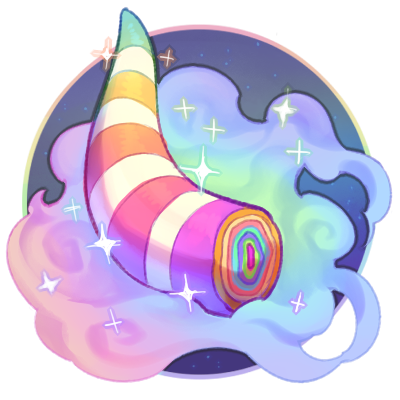 History:
They themselves do not know how far their ancestry goes, but legends tell that with the creation of Crederia, the primordial deities gifted the earth with beings who would fill the world with color and protect the budding life from ending too soon. These deities were said to be babs, who used to communicate with those down below until one day they vanished.  And with their dissappearance came the Miasma... tba
...

Alignments are what decide a bab's capabilities with magic, with common elements being predominant in the world. Sometimes a stray fireball whizzes by you as some clumsy bab is trying out some target practice, or some naughty babs make a ball of water drop on your head as you walk through a doorway. Alignments are for rp and prompt purposes, and rarely can manifest as magical traits for those who have taken their alignment further.